Ottawa, Ontario – The CCHL Tier 2 is proud to announce its Week 20 Stars of the Week. Forward Sean Kearns picks up the first star, who plays with the Ottawa West Golden Knights. Second star goes to Sean James of the Westport Rideaus and third star goes to Bill Gourgon of the Carleton Place Jr Canadians. Noah Haymes of the Ottawa West Golden Knights picks up Honorable Mention.

Kearns, 18, tallied four goals and four assists in three games, leading his team to a 3-0 week. He scored the shootout winner against Ottawa on Tuesday night in a 3-2 win, then collected 1G / 1A against Alexandria in a 5-3 win, and finally, Kearns capped off his best performance of the season by scoring his first career hat trick against the Winchester Hawks on Friday. He collected three goals and three assists for his first six-point game. The Ottawa, Ontario native is tied for ninth in the league with goals (21), second in assists (35) and third in points (56).

James, 17, netted four goals and two assists in three games. He collected a four goal performance in a 7-3 victory over Renfrew on Wednesday. It’s his first four goal game of his CCHL2 career and his third career CCHL2 hat trick. His five game point streak (9G / 8A) came to an end on Friday night against Ottawa, but added one assist in a 5-2 loss to Perth on Saturday afternoon. The Almonte, Ontario native leads all rookies in goals (27), assists (32), points (59), Pointers per game (1.64) and power play goals (11).

Gourgon, 17, had two goals and six assists, leading his team to three wins in three day. He extends his point streak to five games (3G / 7A). He had a good performance against Brockville on Friday January 31st by netting a goal and two assists for a three-point game. After collecting one assist on Saturday, Gourgon had another good performance, this time scoring once and adding three assists for his second four-point game of the season. All of Carleton Place’s wins came against Brockville, Richmond and Athens. The Carp, Ontario native has 15 goals, 27 assists, 42 points in 35 games this season.

Haymes, 20, nets four goals and three assists in three games this week. He led his team to victories against Ottawa, Alexandria and Winchester. After collecting one assist against OJC on Tuesday and one goal against Alexandria on Thursday, he capped off a big night against Winchester by scoring his third career CCHL2 hat trick in a five-point effort. It’s his second hat trick of the season. His first hat trick this year came against Char-Lan on December 12th. The Ottawa, Ontario native is having himself a really good final year of playing CCHL2 hockey and has 19 goals, 25 assists, 44 points in 35 games. 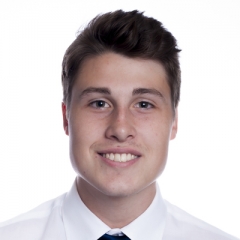